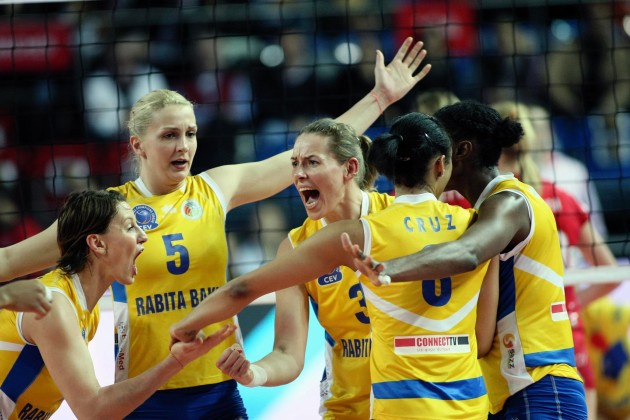 Rabita BAKU jumped out for a 6-1 lead in today’s first semifinal with Unendo Yamamay BUSTO ARSIZIO struggling in passing. The powerful serves of Colombian Madelaynne Montano as well as solid block work gave the Italians a hard time. It seemed as the ladies of BAKU head coach Marcello Abbondanza had made their tactical homework as they perfectly controlled BUSTO ARSIZIO’s spikers. Carlo Parisi tried to reorganize his squad with an early timeout, but it was already too late. Montano hammered for a 16-7 BAKU lead at the second technical break. The power ladies from Azerbaijan kept the pace high with strong serving and some spectacular block-defense actions. On the other side, the Italians didn’t manage to bounce back. Dobrina Rabadzhieva sealed the set (25-14) with a monster block on Margareta Kozuch.

The course of the game didn’t change a lot in the second set as Rabita BAKU controlled the match in almost all aspects of the game. Especially their serving and blocking was outstanding. BUSTO ARSIZIO’s setter Valeria Caracuta tried to accelerate BUSTO’s offensive game, but the poor passing quality of her receivers reduced her choices. Kozuch answered with a blistering winner from the right side, however, the scoreboard already showed a five-point gap at 14-19 in BAKU’s favor. Montano’s outstanding jumping skills drove the Italians mad as the Colombian fired wildly from front and back row to close the set 25-16 in the Azeri’s favor. After two sets, Montana had already 15 points on her personal statistic chart.

In the third set, BUSTO ARSIZIO head coach Parisi brought in US-setter Carli Lloyd to try and stop the one-way game of their opponents. It helped as the Italians led 8-7 at the first technical timeout. Both fan communities did their best to push their stars to the limits, singing and cheering for their favorite squad. The Italians played more consistently in the third period, keeping a two-point lead until 15-13. However, three points in a row gave Rabita BAKU the momentum back. The game now balanced on a knife’s edge with both teams showing spectacular rallies. BUSTO ARSIZIO was one point in front at 23-22, but Rabita BAKU fought back bravely to turn the tables. The Italians dramatically saved two match points before they ended the third set in their favor with a Maren Brinker block winner on BAKU’s Montano.

It was one of the key moments of the match as for the first time of today’s semifinal BUSTO ARSIZIO started to believe in their chances. On the other hand, like the Italians in the beginning of the match, the Azeri players unexpectedly lost their self-confidence. The young Italian stars set an incredible pace in the fourth set with Brinker and Francesca Marcon on fire. While Rabita led 8-7 at the first technical timeout, BUSTO ARSIZIO controlled the game 16-11 and 21-14 in the second part of the set. Captain Christina Bauer concluded a quick combination in BUSTO’s favor to offer their fans a fifth and deciding set.

However, Rabita BAKU jumped out for a three-point lead in the fifth set, forcing BUSTO ARSIZIO head coach Parisi to call an early timeout at 2-5. It didn’t help as the Azeri still put a lot of pressure on their opponents. At side switch, BAKU already led by six points. It was a great demonstration that the ladies of head coach Abbondanza showed at that time of the competition. Foluke Akinradewo brought up match point at 14-6 with a quick combination at the net, before Aurea Cruz served an ace to bounce the Azeri in heaven.