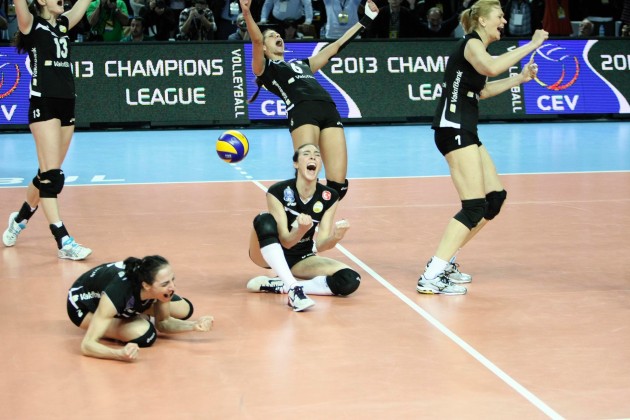 As back in 2011, Vakifbank ISTANBUL and Rabita BAKU met again in today’s gold medal match of the 2013 CEV Volleyball Champions League – Women. Two years ago, ISTANBUL delighted their home fans with a straight-set win over BAKU. Yesterday, both teams convinced the audience with two outstanding performances in the semifinals. Vakifbank defeated host Galatasaray 3:0, whilst Rabita proved too strong for Unendo Yamamay BUSTO ARSIZIO (3:2).

Today’s gold medal match started with Vakifbank ISTANBUL getting a wide advantage early on at 8-4 as Giovanni Guidetti’s team well-covered the net with excellent block work and remarkable offensive power. The Azeri slowly rolled their engines with Aurea Cruz spiking effectively. However, at 6-11, Rabita head coach Marcello Abbondanza asked the officials for a first break to restructure their tactics. Jovana Brakocevic and Malgorzata Glinka combined efforts to move the scoreboard forward in favor of Vakifbank ISTANBUL with blistering spikes over their opponents’ blockers. In the middle of the opening set, the Turks already led 17-10 and never looked back. Melis Gürkaynak brought up set point with a clever service winner, before Brakocevic ended the first set 25-17 in Vakifbank’s favor.

Compared to the first set, the game stayed close in the second period. Neither was going to easily give up the chance to walk away as a winner. At the second technical timeout, ISTANBUL led by two points. The Volleyball fans from all over the world saw a classy final match with both teams showing their best at that stage of the duel. Madelaynne Montano hammered the Mikasa down for Rabita BAKU, but Brakocevic answered with another searing winner from the right to make it 20-17 for Vakifbank. Best setter awarded Naz Aydemir blocked for a 22-18 ISTANBUL lead to pave the way for a well-deserved 2:0 set lead (25-20).

Two sets down, Rabita BAKU needed an urgent comeback to keep its hopes alive for the gold medals. Indeed, the Abbondanza squad showed a fierce reaction in the beginning of the third set. Nevertheless, an 11-7 lead was not good enough to pull through. The match balanced on a knife’s edge now with both teams playing at their highest level. Best blocker awarded Natasa Krsmanovic sent the Mikasa wide at 19-21 to offer Vakifbank ISTANBUL a two-point advantage. Rabita BAKU came closer at 21-22, but the Guidetti squad kept calm with Glinka hammering for a 23-21 lead. At 24-21, Vakifbank had their first match balls, but couldn’t conclude. Guidetti called his ladies off court to give them a short break. After resumption, ISTANBUL Captain Gizem Güresen seized Vakifbank’s third chance to bounce the Turks in heaven.