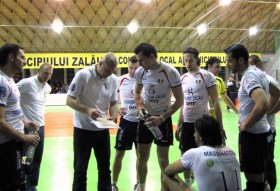 The Romanian team is getting ready to face Italy’s Acqua Paradiso MONZA at home, in Baia Mare, on Tuesday. Despite being a great opportunity for Remat, this match is going to be a tough challenge taking into consideration the fact that MONZA’s players have lately proved that they are a very strong side.

The Italians dominated their opponents in the previous CEV Cup matches, successfully defeating important names in the European Volleyball arena. However, Remat wasn’t a comfortable opponent neither for Russia’s Zenit KAZAN nor Germany’s VfB FRIEDRICHSHAFEN and it is displaying some solid performances also in the national league. The Romanian champions are openly going for a home win and they will certainly play hardball to achieve their goal.

“We have high expectations from this match, even though it is known that this will be a difficult game. Acqua Paradiso MONZA is a very good team, so we need to be much focused. But I feel quite optimistic, as I think that our team works very well and the two recent additions from Greece, i.e. Michael Sarikeisoglou and Athanasios Terzis, fit in” states Zoltan Mozer, the team captain of Remat ZALAU.

The Polish head coach of Remat, Mariusz Sordyl, adds that “MONZA is definitely a strong team. They come here with the desire to win. But in sports everything is possible. We are getting ready for a Volleyball fiesta in Baia Mare. It doesn’t happen every day to have the possibility to play against teams like MONZA, so I am sure that the fans from Zalau and Baia Mare will enjoy this match. We will do our best to make this game spectacular and even to win”.