Belgorod, Russia, January 29, 2012. The sixth edition of Russia’s “All Stars Game” was held yesterday at “Cosmos” sports hall in Belgorod with the same format already tested last year in Kemerovo, i.e. with the participation of two teams whose players were regrouped by taking into account the geographical location of the clubs they normally represent. 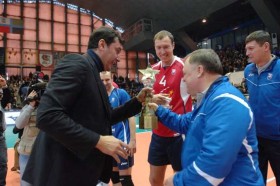 “Team West” immediately got control of the operations and their coach, Gennady Shipulin, profited of the clause foreseen in the regulations – i.e. no limitation in substitutions – to send out all of the players included in his group. “Team West” comfortably set the pace all the way through but some great serving provided by the MVP of the 2011 FIVB World Cup in Japan, Maxim Mikhaylov, helped the side from the East cut the gap and eventually draw level at 24 all. A very exciting final rush followed with “Team West” eventually wrapping it up at 30-28 as David Lee blocked Denis Biryukov.

“Team East” showed many problems in reception in the opening of the second set so that their opponents could dictate the tempo with a margin of four (8:4) by the first mandatory stop. This cushion – although Maxim Mikhaylov and Pavel Moroz played at their very best – was maintained up to the end of the set (25-21) as the always passionate audience in Belgorod was entertained with some world-class Volleyball.

“Team East” finally found the right tempo in set 3 being up in the score (16:13) also at the second technical time-out. However, “Team West” cut the gap to only one point before Sergey Tetyukhin shattered the “Eastern” defense with his magnificent service. “Team West” eventually finished it in straight sets (25-20) with the last point being contributed by an ace of Alexander Kosarev.

Top scorers of the day were Pavel Moroz with 17 points for “Team East” and Jochen Schöps (12) for the winning side. Best players of the event were named Alexander Kosarev and Konstantin Ushakov for “Team West” and “Team East” respectively.

Picture: the President of the Russian Volleyball Federation, Mr. Stanislav Shevchenko, awards the players of “Team West” and their coach Gennady Shipulin

CEV: Knack ROESELARE plays strong Slovenian side in Challenge Round