CEV: Knack ROESELARE plays strong Slovenian side in Challenge Round

Roeselare, Belgium, January 29, 2012. Belgium’s Knack ROESELARE recently advanced to the Challenge Round of the 2012 CEV Volleyball Cup thereby achieving one of the main goals set for this season by the local management. 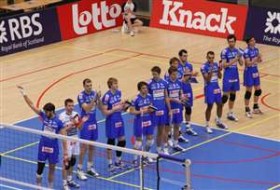 Their next opponent is ACH Volley LJUBLJANA of Slovenia, a team coming down from the prelims of the 2012 CEV Volleyball Champions League and with a long tradition in the European Cups.

Previously known as ACH Volley BLED, the club from Slovenia made it to the final four of the CEV Volleyball Champions League back in 2010 eventually placing fourth in Lodz (Poland) and wanted to repeat that same result also this year, but had to settle for third in its preliminary group as France’s TOURS VB and PGE Skra BELCHATOW proved too strong for the players mentored by Igor Kolakovic.

ACH Volley was ultimately among the third best-ranked teams of the prelims and was hence moved to the Challenge Round of the CEV Volleyball Cup. The team is on a class of its own in Slovenia having claimed the seventh – and sixth in a row – title in the national cup earlier this month and having lost only one set so far in domestic competitions.

After going through some ups and downs in the national league, Knack ROESELARE is ready to challenge that strong opponent with the home match scheduled for this coming Wednesday, February 1, at “Schiervelde” sports hall.