Bielsko-Biala, Poland, January 30, 2012. Poland’s Aluprof BIELSKO-BIALA is getting ready for the 1/4 finals of the 2012 CEV Volleyball Cup – Women where the club from Silesia will play the current leader of the Italian national league, Yamamay BUSTO ARSIZIO. 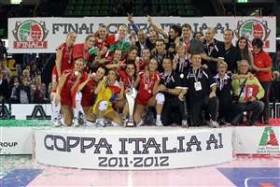 The match is scheduled for Tuesday evening with all local fans longing for another classy performance of the home heroines that in the previous round got past Russia’s powerhouse Uralochka-NTMK EKATERINBURG.

Yamamay BUSTO ARSIZIO (pictured) claimed this Sunday Italy’s national cup after edging Rebecchi Nord Meccanica PIACENZA in straight sets (25-13, 25-18, 25-17), this being the greatest success in history for the Volleyball club that was founded back in 1998.

The group mentored by Carlo Parisi has scored a total of 13 consecutive wins in the national league topping the charts there with 38 points.

As for their European campaign, the Italians easily disposed of Rocheville LE CANNET in the first round while their task in the 1/8 finals was a little more difficult as they needed five sets to edge Igtisadchi BAKU in Azerbaijan after scoring a 3:0 home win.

Aluprof BIELSKO-BIALA comes from a weekend that was not that positive as the team lost in the semifinals of the national cup to Atom Trefl SOPOT, but the players from southern Poland caused quite a sensation in the 1/8 finals of the CEV Volleyball Cup as they eventually got past Uralochka after losing 0:3 in Russia, scoring the same result at home and taking the deciding “golden set”.

All pre-conditions are hence there for a splendid Volleyball evening on Tuesday with a ticket for the Challenge Round being at stake before the return match coming up next week in Italy.