Budapest, Hungary, January 30, 2012. After completing a busy weekend that included the meetings of the CEV Executive Committee and Board of Administration, CEV President André Meyer enjoyed the opportunity – before leaving Hungary’s capital city – to visit Dr. Endre Holvay, a well-known personality in the Volleyball arena for he has been actively involved in the sport for several decades. 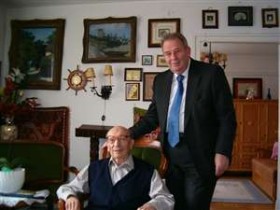 The now 94-year old Holvay – who was inducted into the Volleyball Hall of Fame in 2006 – was introduced to Volleyball as a high school student.

As a competitive national player, he helped found the Hungarian Volleyball Federation.

Holvay served the Federation as a player, a coach and a referee.

He was also President of the Organizing Committee and of the National Referee Committee.

He also served as President of the FIVB Refereeing Commission.

“Dr. Holvay may be well considered one of the living pillars of Volleyball not only in Hungary, having served and assisted for decades both the FIVB and the CEV mainly by taking care of numerous educational and development courses that were held all over the world. We shall learn from his example as at his age he is not yet tired of Volleyball and actually we hope to have him at our side also for the years to come” says CEV President André Meyer after a short visit to Holvay’s home.

CEV CL: Everything is ready in Macerata for Italian derby