CEV CL: Everything is ready in Macerata for Italian derby

Macerata, Italy, January 30, 2012. The “Palasport Fontescodella” will be completely sold-out this coming Wednesday as the home guys of Lube Banca Marche MACERATA play host to their compatriots of Bre Banca Lannutti CUNEO for the first round of action in the Playoffs 12 of the 2012 CEV Volleyball Champions League. 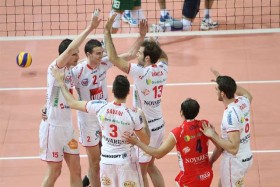 Everything is ready in Macerata for Italian derby

There is a long-lasting rivalry these teams are known for as they have been regularly crossing their ways in all domestic competitions; Lube Banca Marche MACERATA will be playing Bre Banca Lannutti CUNEO for a total of three times in one week as another game starring these sides is scheduled also for February 5, but this time for the regular season of the national league.

This is the second time that MACERATA plays another Italian club in Europe’s most elitist competition after losing 3 years ago to TRENTINO Volley in the semifinals.

Additional flavor is contributed by the current head coach of MACERATA, Alberto Giuliani, who used to mentor Bre Banca Lannutti CUNEO up to last year and guided that group along the way to two memorable titles in the national league (2010) and national cup (2011).

Moreover, this series of games will have some special value also for some players who have moved to one or the other club, with Wout Wijsmans and Luigi Mastrangelo having defended the honors of Lube Banca Marche in the past while two of the local stars, namely Igor Omrcen and Simone Parodi, still have fond memories of the time they spent in Cuneo.

“Even though at this stage of the competition you cannot expect to get any easy opponent, I think we did not have much luck with the DOL having been drawn to play CUNEO already in the Playoffs 12” says Alberto Giuliani.

“Every single match we play as from now in the Champions League will be some kind of a final but our first goal is to take home the match coming up in a couple of days”.

As for Bre Banca Lannutti CUNEO, after losing to Sisley BELLUNO in the 1/4 finals of the national cup this past Thursday – missing Serbian setter Nikola Grbic who is most probably going to be out for some weeks after injuring a finger – the club fired head coach Flavio Gulinelli and his former assistant Camillo Placì is currently at the helm of the team.

Meeting of all Patagonian Volleball Federations with...