Nairobi, Kenya, January 30, 2012 - Kenya have named the 12 players that will represent the country at the CAVB Women's Olympic Qualification tournament which begins in Blida, Algeria on Wednesday. 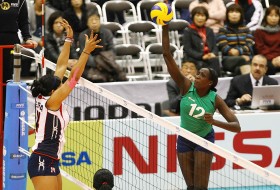 Coach Gideon Chenje has gone for experience with most of the players regulars who have featured in high profile tournaments such as the FIVB Volleyball Women’s World Cup and World Championships in the past.

Noel Murambi’s dream to play in the Qualifiers, which will see the winners qualify for the London 2012 Olympic Games, has failed after the Kenya Pipeline failed to recover from injury.

Edna Rotich who did not travel with the team to the World Cup and All Africa Games is Murambi’s replacement.

Setter Jane Wacu, who missed out on the World Cup squad is back in the team while the inclusion of Rotich and Wacu is expected to strengthen the team as they look to return to the Games for the first time since Athens 2004.

The fast-rising Pipeline duo of Roselyn Odhiambo and Esther Wangeci have retained their places as has hard hitting Everline Makuto of Kenya Prisons.

“I hope Odhiambo and Wangeci will maintain the great form that saw them help Pipeline win the national league,” Chenje said.

Colourful Prisons spiker Everlyn Makuto who was twice voted Most Impressive Player at the last World Cup has also been recalled.

“Makuto is one of the attackers we’ll rely on in Blida to take Kenya to the Olympics,” Chenje, who is taking charge for the first time, added.

“If fairness prevails both on and off the court then I can confidently say that Kenya will qualify for London. The travelling players are arguably some of the best in Africa and I see no reason why they should not qualify for the Olympics.”

Standing in their way will be Algeria, Egypt and Seychelles.

Italy: A loss but a good fight

Italy: No mercy from Perugia