CEV CL: Russian storm is the next challenge for DRESDNER SC

Dresden, Germany, January 31, 2012. This past Wednesday the players of DRESDNER SC claimed the top duel in the Bundesliga by edging their archrivals of SCHWERINER SC with the score of 3:2 thereby getting the right confidence for the upcoming duel with Russia’s Dinamo KAZAN in the 1/8 finals of the 2012 CEV Volleyball Champions League. 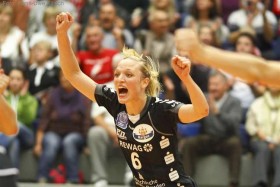 Russian storm is the next challenge for DRESDNER SC

The match with last year’s national champions was not the only preparatory step for the much awaited clash with the stellar side from Tatarstan.

Only three days later DRESDNER SC had to play another round of the national league, this time with Alemannia AACHEN, and head coach Alexander Waibl decided to rest some of his best players there to save energy for the match with Dinamo KAZAN.

However, the reserves did not disappoint at all and even though setter Mareen Apitz, outside hitter Katharina Schwabe and team captain Stefanie Karg did not join the game at all, still DRESDNER SC could claim its sixteenth consecutive win in the Bundesliga (3:1; 25-20, 25-18, 21-25, 25-15).

The qualification for the 1/8 finals of Europe’s most elitist competition is already an enormous success for DRESDNER SC but the team is ready to take up the challenge brought by Dinamo KAZAN and its leader Ekaterina Gamova.

“Even though we are the underdog in this clash we want to deliver a good performance and delight our audience possibly taking home this first match” says coach Waibl.

The atmosphere at “Margon Arena” was already amazing as DRESDNER SC played two of the best teams in the world during the prelims, Azerbaijan’s Rabita BAKU and Turkey’s Fenerbahce Universal ISTANBUL.

“Our fans have got the chance to see some of the best players out there in action here in Dresden but they have also seen our team improve match after match. We have had additional expenses related to this Champions League adventure that were not foreseen but we are being paid back by the loyalty of our fans and the great performances delivered by the players” says Managing Director Sandra Zimmermann.