Bielsko-Biala, Poland, January 31, 2012. Poland’s Aluprof BIELSKO-BIALA caused quite a sensation tonight as the ladies from Silesia ended the incredible winning streak of Italy’s Yamamay BUSTO ARSIZIO, a team that had not suffered any defeat so far this season by combining matches of the national league, national cup and European Cups. 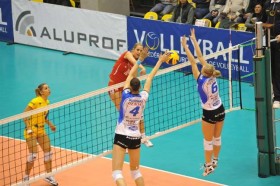 The home side was evidently not afraid of such a great opponent and played with good tempo right from the start.

Aluprof enjoyed a margin of 2 by the first and second technical time-out and finally wrapped it up at 26-24.

In set 2, as the score stood at 10:9, Aluprof scored 6 consecutive rallies and even though the Italians gradually improved the quality of their play, still this was not enough to stop the march of the home girls mentored by Mariusz Wiktorowicz (25-20).

Aluprof suddenly lost momentum in the third set making many errors and lacking consistency in attack.

Yamamay controlled the game and called for a fourth set after sealing that section of the game with the score of 25-19.

Their dominance was overwhelming also in set 4 where they opened the gap after going up 12:10 for a speedy 25-15.

With the help of their supporters the home heroines started well in the tie-break and eventually got a standing ovation as they finished it off at 15-7 to achieve something none had done so far this season, i.e. to stop the invincibility of Yamamay waiting for the return scheduled for next Thursday in Italy.

Italy: Smerilli: Defeat motivates us to do better