After suffering a 0:3 defeat last week in Germany TOURS VB is ready to take its revenge by playing VfB FRIEDRICHSHAFEN for the return match in the Playoffs 12 of the 2012 CEV Volleyball Champions League. 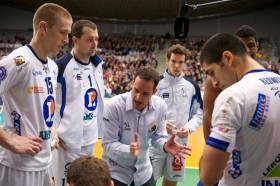 TOURS VB is eager for revenge!

To make it to the Playoffs 6 the guys from France need first to win the match which is slated for this Wednesday at “Robert Grenon” sports hall and then go for the golden set that will eventually determine the outcome of this clash.
TOURS VB may be missing Serbian outside hitter Milos Terzic, who got injured last week in Friedrichshafen; there the guys around captain Rafael Redwitz played a good opening set but were finally demolished in straight sets after slowing down their tempo.
Although they lost their last match of the national league to Lille TOURCOING Métropole the players of TOURS VB are confident that they can make it to the Playoffs 6 via the help of David Konecny and Yosleyder Cala Gerardo, who are currently ranked third and ninth in the standings of the top scorers in Europe’s most elitist competition. On the other side of the net their toughest competitor shall be Oliver Venno, who is placed fourth at the moment in that same chart.

Brazil: Dentinho is the best player of the third round of the tournament