CEV CL: Arkas IZMIR about to write another chapter in Turkey’s Volleyball history

Izmir, Turkey, February 7, 2012. Arkas IZMIR may write history this Wednesday by turning into the first men’s club from Turkey able to advance to the Playoffs 6 of the CEV Volleyball Champions League. 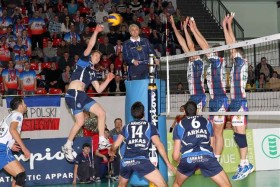 That feat is definitely not that out of reach especially after Arkas scored an away win last week in Poland in the first round of action for the Playoffs 12 against Zaksa KEDZIERZYN-KOZLE.

Arkas IZMIR already contributed some premiere in Turkey’s Volleyball history being the first club from that country to win a European trophy, namely the GM Capital Challenge Cup back in 2009.

“We play a very experienced opponent and hence we shall take advantage from the fact that we play at home” says Canadian head coach Glenn Hoag.

“We had a good result last week in Poland by winning the first game 3:1 but we have one more game to take, so we have to fight for every single point and the supporters will be our key player there” he adds.

Italy: Round 18 in numbers