Moscow, Russia, February 7, 2012. All Volleyball fans in Russia’s capital city are waiting for a dramatic showdown when it comes to the return match for the 1/8 finals of the 2012 CEV Volleyball Champions League starring the home heroines of Dinamo and Italy’s MC-Carnaghi VILLA CORTESE. 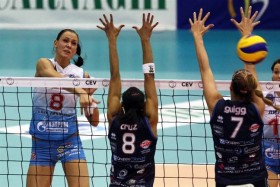 Dinamo searches for its best play to edge VILLA CORTESE

The players of Dinamo have to reset their minds after they lost last week in Italy and are intensively training for the game scheduled for this Thursday, February 9.

“We have to show our best play” says head coach Boris Kolchin.

“Before the DOL for the 1/8 finals we were all trying to guess which team the drawing would have assigned us to and finally it turned out to be an Italian side as we had somehow foreseen. After losing last week we only have the advantage of eventually playing the deciding golden set here in Moscow. This season has been full of ups and downs; we are also sidelined by some injuries at the moment, so all players shall be ready to help the team” he adds.

Dinamo’s performance was somehow affected by the time difference last week as the game got started in Italy at a time where it was already late at night in Moscow. “We do not know much about the strategy and plans of the Italian team but we know that we have to play good to win the match and the golden set” concludes Kolchin.

Italy: Macerata in search of breakthrough in Europe