CEV CL: Arkas celebrates premiere for Turkey’s Volleyball by making it to Playoffs 6

Arkas IZMIR wrote history tonight for Turkey’s Volleyball being the very first team from this country able to qualify to the Playoffs 6 of the CEV Volleyball Champions League. The group coached by Glenn Hoag did so by routing Zaksa KEDZIERZYN-KOZLE in straight sets (25-23, 25-16, 25-18) 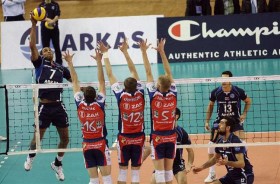 Some 3’500 fans were in attendance tonight at “Halkapinar” sports hall as Arkas opened by enjoying the narrowest margin at both mandatory stops in the opening set before finishing it off at 25-23. Liberman Agamez and Joao Paulo Bravo paced the home side in set 2 for a speedy 25-16. Zaksa coach Krzysztof Stelmach made many changes in his starting six for set 3 but could not stop the splendid march of Arkas that completed the game in straight sets (25-18). Agamez top scored for the home side with 26 points, a massive haul for a match that ended in 3 sets.
“We played a good match and controlled the opponent. I am happy that we are the first team from Turkey capable of making it to the Playoffs 6 but it is time to bring this country to the final four” says coach Hoag.