Some 4’000 fans are expected to join this coming Sunday the finals of Belgium’s national cup at Lotto Arena in Antwerp. 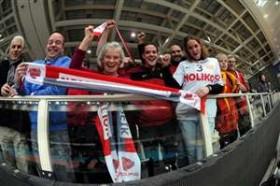 Great audience expected for finals of Belgian cup in Antwerp

The ladies of Asterix KIELDRECHT took the trophy last year only at the tie-break causing a major disappointment to their rivals of VDK GENT Dames. This time their opponent will be Dauphines CHARLEROI, which is currently ranked third in the national league. Asterix edged VDK GENT Dames in the semifinals only at the golden set.
Last year Noliko MAASEIK lost the final after missing two match balls versus the archrivals of Knack ROESELARE. After losing in the Playoffs 12 of the CEV Volleyball Champions League to TRENTINO PlanetWin365, Noliko will play in Antwerp Euphony ASSE-LENNIK, the team that debuted this year in Europe’s most elitist competition and that has downed Knack in the semis. Euphony has got high expectations for this final even though the team around Dutch head coach Marko Klok remains the outsider of the day.

CEV CL: Arkas celebrates premiere for Turkey’s Volleyball by making it to Playoffs 6