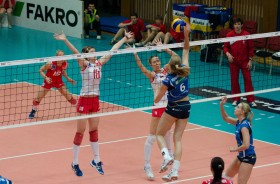 The home side started well going up 8:3 by the first technical time-out; the gap was gradually widened (16:8) as the young players from Serbia were having problems in reception. On the other hand MUSZYNA was attacking solidly with Joanna Kaczor scoring 7 points all alone in this set. Three more points along the way to the final 25-17 were added by Kinga Kasprzak, who was back in action after nursing a serious injury.

The home players were up 10:7 in set 2 as Serbian head coach Ratko Pavlicevic asked for his first time-out. It did not help much as MUSZYNA stretched the score to 18:14 before Crvena Zvezda drew level at 20 all. Finally Bank BPS Fakro had the upper hand wrapping it up at 25-23.

MUSZYNA set the tempo all the way through also in the third set and Australian Rachel Rourke finished it off with a fast attack from the middle.

“I am happy we were able to win a close second set and the match. We wanted to take three points from this game and we attained our goal” says head coach Bogdan Serwinski.

“I think we need to learn a lot. We had some problems in attack in set 2 but we will try to play better in Belgrade” said Ana Bjelica who scored 11 points for Crvena Zvezda.

CEV M: Program for the semifinals of...