CEV CL: Rabita and Fenerbahce headline next round with “clash of the titans”

Baku, Azerbaijan, February 18, 2012. The 2011 club world champions of Rabita BAKU are getting ready for the major highlight that is likely to headline the 1/4 finals of the 2012 CEV Volleyball Champions League – Women, i.e. their double clash with Turkey’s Fenerbahce Universal ISTANBUL. 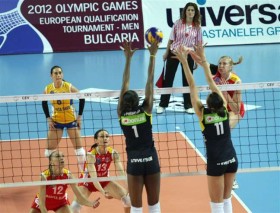 After having crossed their ways already in the prelims, with each team winning its respective home match, this time there will be even more at stake as the side coming out on top will qualify for the final four scheduled for March 24-25 in Azerbaijan’s capital city.

Fenerbahce and Rabita are the winners of the last two editions of the FIVB Club World Champs and hence this 1/4 final is a stellar confrontation starring some of the best Volleyball players in the world. Rabita will be hosting Fenerbahce next Wednesday, February 22, in Baku while the return match is scheduled for February 29 at “Burhan Felek” Volleyball Hall in Turkey’s metropolis.

Rabita recently edged Igtisadchi BAKU in the last round of the national league and US-American outside hitter Kimberly Glass – who played for Fenerbahce in the past – is very much looking forward to this unique duel: “Our preparations are running at full speed and we are also trying to improve every single fundamental day by day. Fenerbahce is a great side but we will do our best to continue our campaign in the Champions League” says the 2008 Olympic silver medalist.

ITA A1: Cup semis, Omrcen up for it