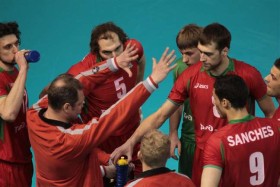 Lokomotiv NOVOSIBIRSK fully focused on Playoff round with Arkas IZMIR

The home guys from Siberia’s largest city evidently need to seize this first round to maintain good chances to eventually make it to the final four scheduled for mid March in Lodz, Poland, once it comes to the return game in Turkey.

The “Russian express” recently finished the regular season of the Superleague with a 3:0 win (25-19, 25-16, 25-22) against Gazprom-Ugra SURGUT to take second place in the standings of the Eastern Conference.

Via this result Lokomotiv will skip the 1/8 finals of the national league thereby saving mental and physical energy for the Playoffs 6 of Europe’s most elitist competition.

“After qualifying directly for the 1/4 finals of the Superleague we got some more time to prepare for the matches with Arkas” says Lokomotiv head coach Andrey Voronkov.

“We already have some experience with Turkish teams after playing Fenerbahce in the prelims but this will be a great fight” he adds.

“We respect all opponents but we shall not forget that these are matches with a ticket to the final four at stake” adds US-American middle blocker Ryan Millar.

CEV CL: Rabita and Fenerbahce headline next round with “clash of the titans”