On Thursday ACH Volley Ljubljana qualified for the Final Four of this season's Middle European League. The Slovenians won also the play-off return match against the hotVolleys team from Vienna clearly at 3:0 (25:12, 25:13, 25:15). The encounter at the Sportna dvorana Tivoli in Ljubljana only lasted 58 minutes. 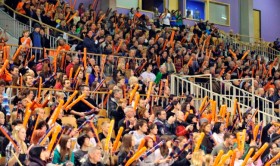 Also Mladost Marina Kastela qualified as last team for the tournament of the top 4 teams.

The Croatians secured their place in the Final Four by winning the golden set against VCA Hypo NÖ.

After the 1:3 in the first encounter the guys from Austria seemed to have everything under control in the beginning of the return match.

However, after the clear dominance in the first three sets the guys of VCA apparently had shot their wad and the golden set was from the beginning a clear sweep for Kastela. In the end the Croatians were able to secure a 15:6 in the golden set.

“In the decisive set we had to take an early time out (Note: at the score of 0:3). Up to this moment we had two chances to score which we did not use. Of course, this made our opponents stronger and they also served accordingly. In the short time we were not able to stabilize our reception and could not go through with the sideout“, explained VCA’s Miroslav Palgut.

The participants of the Final Four are thus determined.

Besides ACH Volley Ljubljana (SLO) and Mladost Marina Kastela (CRO), these are Hypo Tirol Volleyballteam (AUT) and Chemes Humenne (SVK), who kept the upper hand in the golden set against the top team of the qualification round Posojilnica Aich/Dob on Wednesday.