Itas Diatec Trentino, champions of Italy, European and World vice-champions, will challenge today Sisley Belluno. Both most favourite teams in Rome will try not to betray the expectations in the Final Four of Del Monte Cup Italy. 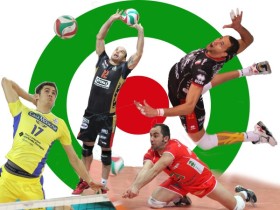 They play today in Palalottomatica, for the second national trophy (after the dispute in Super Cup of Cagliari), which is also the first pass for the Champions League next season.

It is definitely the team of Radostin Stoytchev. Before the championship with an easy +10 points from the second classification, the club has participated on all fronts, has expanded the team, which allows them to stay in good condition, despite the lacking of the blue center Emanuele Birarelli (ill) from Trentino in the semifinals.

The club that wants to break the ice and to gain further self-esteem is Lube Banca Marche Macerata. The coach Giuliani does not ignore the mixed results, it is clear that his team is a bit tired, perhaps more mentally than physically.

Nevertheless, it is seen in the Champions League how it is like when adrenaline and experience are good credentials.

Stankovic, from Serbia who has injured the finger three times, is traveling with a bandage and is in doubt.
The team in the league is back with four straight losses.

Sisley Casa Modena and Belluno. Today the protagonists will be the two favorites, Macerata and Trentino, respectively.
Emilia is looking for to get up, Treviso is trying to revive the tradition.

Fei, vice-League top scorer, returns to Palalottomatica. He was booed after the final of World Championship, the desire for revenge is evident.