Russia’s Zenit KAZAN scored this afternoon a second home win in straight sets (25-17, 25-21, 25-18) against VfB FRIEDRICHSHAFEN – after having done so already in the prelims of the 2012 CEV Volleyball Champions League – and is hence only one step away from making it to the final four scheduled for March 17-18 in Lodz, Poland. 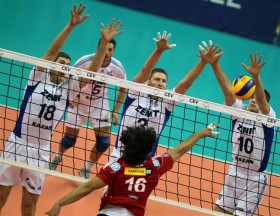 After having enjoyed a break of 10 days, the home guys really wanted to deliver a great show for the good of the local audience and hence the game with Germany’s champions attracted some 4’000 spectators there in the capital city of Tatarstan. By the mid section of the opening set it was already quite clear that Zenit was going to seize the day, with US American Reid Priddy standing out in attack (17:12). The guests took many risks but their attacks were systematically stopped by the Russian block, with Nikolay Apalikov contributing the last two points of the set.

Very long rallies delighted the fans in the opening of set 2 as both sides were showing their skills in defense, but middle blocker Marcus Böhme – unusually playing as opposite because of the injuries affecting Oliver Venno and Zoran Jovanovic – made a flurry of mistakes for VfB. On the other side of the net local star Maxim Mikhaylov was just on a class of his own also from the serving line.

With two consecutive blocks of Canadian Thomas Jarmoc the guys from the Lake of Constance went up for the first time in the score in set 3 but libero Vladislav Babichev and Mikhaylov turned the charts around, with Nikolay Apalikov finishing it off in straight sets with his stellar blocks.

Even though he committed many errors, Marcus Böhme finished the game as top scorer with 18 points while Mikhaylov totaled 16 for Zenit. “As they were missing Oliver Venno, our opponents were sidelined in their offense but they still remain a very strong and dangerous rival. We will have a tough return game next week and we are not going to relax after today’s victory” stresses Apalikov.

“We really count on the return game at home. Today we made many mistakes but still did not play too bad. We shall not let them impose their game next week” concludes VfB mentor Stelian Moculescu.