CEV CUP W: Tomis repeats itself and qualifies for semifinals of CEV Cup 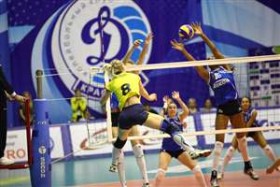 Tomis repeats itself and qualifies for semifinals of CEV Cup

The match was attended also by Dan Petrescu, the Romanian-born manager of the Kuban football club from Krasnodar, who together with his staff was keen to understand the secrets and ABC of Volleyball.

The guests from Romania caught an excellent start (6:0) and basically controlled the game all the way through in the opening set (16:10, 20:13), before Dinamo got rid of some pressure and started playing with more accuracy to cut the gap to only one point (22:21).

It seemed that the hosts could complete their comeback but a serving error of Daria Zinchenko sealed the 25-23 for Tomis.

Even though they had had a long and tiring journey to Krasnodar, the guests played with intensity also in set 2, attacking well and displaying a solid reception, with almost no mistakes at all to go for the 2:0 (25-18).

After initially trailing 2:8, Dinamo showed more composure in set 3 and could eventually bring it home (25-18) to stretch the game.

However, the players of 2004 Tomis CONSTANTA did not let it go and after the score was leveled at 21 in set 4, they accelerated their pace to finish it off (25-22) and advance to the semis to play there Turkey’s Galatasaray ISTANBUL.

“I am really happy with this win as well as with the performance of my players” said head coach Darko Zakoc. “We wanted to play better than we had done in Romania and we did so. Dinamo is relying mainly on Tatyana Kosheleva but she can’t win a match all alone”.

“The Romanian team showed a great defense and this is hence the end of our European campaign for this year. The absence of our main setter had a clear impact on the game” concluded Dinamo mentor Valery Losev.