Baku, Azerbaijan, March 2, 2012. Azerbaijan is gradually turning into a real Volleyball “Mecca” with the local clubs having signed some of the world’s finest players to live up to their ambition to dominate all major international Volleyball competitions in the years to come. Actually this dream was already fulfilled this past October as the ladies of Rabita BAKU were crowned club world champions in Doha, Qatar. 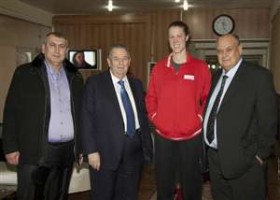 With this in mind, CEV President André Meyer visited last week – accompanied by CEV Vice President Jan Hronek – that country not only to praise the impressive efforts that have been made up to now, but also looking forward to the additional development of the sport in Baku and its surroundings.

Azerbaijan has embarked on ambitious plans whereby the country shall possibly turn into home to one of the FIVB regional development centers that are about to be established across Europe.

Mr. Meyer was pleased with the work so far delivered by the Azeri authorities and while being there announced that an additional evaluation and inspection of the facilities will follow in combination with the next meeting of the CEV Executive Committee slated for late March, by the time Baku will host the final four of the women’s Champions League.

ARG: Coaches about finals of the League Argentina for Women

CEV CUP W: Tomis repeats itself and qualifies for semifinals of CEV Cup