Urbino, Italy, March 17, 2012. Yamamay BUSTO ARSIZIO qualified on Saturday for the final of the 2012 CEV Volleyball Cup – Women after downing in straight sets the compatriots and 2011 champions of Robur Tiboni URBINO (25-19, 28-26, 25-20) to back up the home win of this past Tuesday. Their opponents in the final will the winners of the clash starring Galatasaray ISTANBUL and 2004 Tomis CONSTANTA scheduled for Sunday at 8 pm. 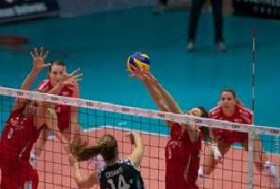 Even though they were missing their captain Helena Havelkova – who accompanied the team from the bench – the current leaders of Italy’s national league displayed a great performance anchored by Aneta Havlickova (19 points) and Floortje Meijners (18) while Francesca Marcon was voted MVP of the game and Chiara Dall’Ora offered a great performance in defense as well as in attack (70% of efficiency).

Valentina Tirozzi and Juliann Faucette were the best players for URBINO in this return match.

“This was not an easy match especially since it is not easy to replace a great player like our leader Havelkova. I did my best at the net as well as from the back row and I think that everything went well, as we won in straight sets and I am super happy” said Floortje Meijners after the game.

“I think the turning point came as we fought back in the second set, since afterwards we could control the match and pocket our ticket to the final. I am proud of my players because they always deliver a great and passionate performance especially under difficult circumstances. We have a very tight schedule but we try to deliver our best as long as we are strong enough for this. I am also very happy for Floortje because she did a great job right in combination with such a key game” stressed the head coach of Yamamay, Carlo Parisi.

Yamamay will be playing its second CEV Cup final after taking the trophy in 2010 as that side edged Crvena Zvezda BEOGRAD at the finals held in Baku.