Luxembourg, March 20, 2012. The European Sports Organizing Commission (ESOC) chaired by Mr. Pierre Mulheims (LUX) got together in Luxembourg City to work out some proposals that will be discussed by the CEV Executive Committee and Board of Administration when it comes to the next plenary meetings. 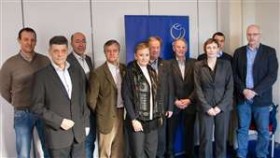 “Our Commission has been devoting much attention to the next competitions for national teams coming up in 2012 and 2013. The final rounds of the 2012 CEV Junior Volleyball European Championship are scheduled for this summer in Turkey and Poland/Denmark, and as per decision of the CEV Board, only the organizer will be automatically qualified for the next edition, so this means that even the medalists that we will celebrate in Ankara and Gdynia will not get the right to make it to the next Championship in 2014” recalls Mr. Mulheims.

The same applies also to the CEV Youth Volleyball European Championship, whose final round is set to take place in April 2013 and will be jointly organized by Bosnia and Herzegovina/Serbia for the boys and Montenegro/Serbia for the girls.

“Only the teams representing the organizing country will be directly qualified for the 2015 edition” says Mr. Mulheims. “As for the venues hosting the matches of the final round in 2013, these are already known and inspection visits of all facilities shall take place very soon”.

The ESOC has prepared also a proposal for a European ranking – considering the results claimed in 4 years – for national teams of the different age groups (senior, junior and youth) which will be also discussed and analyzed by the CEV ExCom and Board. in their next meetings.

“We also reviewed the reports of the inspection visits recently organized for the 2013 CEV Volleyball European Championship, whose men’s finals will be hosted in a football stadium in Copenhagen, the Parken Arena, while the Max-Schmeling-Halle in Berlin will be welcoming the top four sides coming out of the women’s competition” stresses Mr. Mulheims.

“The Commission has additionally worked on the qualification process for the next World Championships. As for the international calendar, the ESOC has prepared a proposal in order to avoid any clashes with FIVB events“.