On Wednesday 21 March at 20.30h, Acqua Paradiso Monza Brianza and Bre Banca Lannutti Cuneo, will play the postponed match of the 11. day of the tournament. 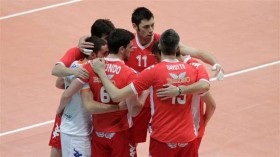 Monza last Sunday lost the opportunity to access the range of CEV Cup final after the defeat of Moscow and it seeks redemption in the last few matches of the season to get the best possible position in the play off.
The team of Zanini can still fight for the fifth place, now occupied by Casa Modena.

“We need to recover from the failure in the CEV Cup Final and this can only be achieved with a great reaction.
The confrontation with Moscow must not be forgotten. It should be an enrichment for the team in the future, in particular for younger players.
In sport as in life the good characteristic of people is to stand up after a ‘fall’. Both winning and losing is a part of the game, but new challenges are offering you the chance to redeem immediately.
The common desire of staff and players for the remaining three games of the regular season, starting from Cuneo, is this: react and give your best in the play off . All of us will offer the greatest commitment and professionalism to give this team a historic achievement.
The play off of semifinals is the great motivation that we all have”, said Zanini.

On the other hand, Bre Banca Lannutti Cuneo must do the best in the last three games for getting on the second place, now occupied by Lube Banca Marche Macerata. The record of the setter of Cuneo, Nikola Grbic, is 4 points from 2500 in the championship.

The coach Placi: “We come from a week of intensive training. We worked hard on certain game situations that are now improved and we go to Monza to play a good game.
This week, we will take the  advantage of the postponement. We have worked so hard, increasing the quality of training and focusing specifically on some fundamentals. Now, in the match against Monza, first of all I expect to see a good performance and then to take the victory and win the valuable points.”