Istanbul, Turkey, March 27, 2012. Galatasaray ISTANBUL claimed tonight the first final match of the 2012 CEV Volleyball Cup – Women after edging 3:1 (25-16, 22-25, 25-23, 25-22) Italy’s Yamamay BUSTO ARSIZIO. The return game is scheduled for this coming Saturday and the Italians will have to score a home win and seize also the golden set that would eventually follow to take that trophy for the second time in history after emerging on top of the charts already back in 2010. 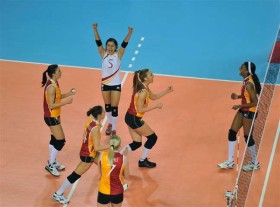 Going into this match the players of Galatasaray had not lost any single set in their previous home games of this European campaign and they started pretty well by dominating the opening set and claiming it with the comfortable score of 25-16. The guests from Italy fought back in set 2 where they imposed their rhythm going up 21:13 before Galatasaray clawed back helped by the service of their Italian setter Eleonora Lo Bianco. The hosts turned the charts around moving up 22:21 after scoring 8 consecutive points but that was all as the Czech duo composed by Helena Havelkova and Aneta Havlickova anchored Yamamay to the provisional 1:1 by scoring the next 4 rallies.
BUSTO ARSIZIO dictated the tempo of the game for most of the time also in set 3 before Cuban star Rosir Calderon stepped up for Galatasaray and she eventually determined the fate there in the “money time” with a classy performance to finish it off at 25-23 for the hosts.
A similar plot unfolded in set 4 with Yamamay controlling the operations but this time it was young rising star Selime Ilyasoglu that changed the course of the game with her spikes, supported by the attacks of Calderon and some blocks contributed by Lo Bianco (25-22).

ITA A1: Final rush; Stokr: At work thinking about Bovolenta