One of the centers of UPCN Voley Club commented on the matchs against La Union de Formosa. The team of Fabian Armoa got the first two victories and on Thursday can define the series on its court. 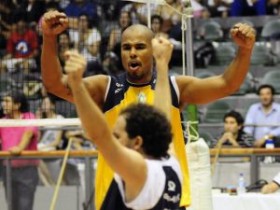 “So far we have done everything right. Therefore, it is up to us to be finalists,” said “Junior”.
On Thursday, the last champion will receive its rival Formosa with the possibility of getting the ticket to the finals. The match begins at 21h and will be broadcast on ESPN+.

As the visitor, the team of UPCN won convincingly with 3:0 in both games and that caused a significant reaction in the tournament, because more parity was expected between two teams.

“From the outside it looks like it was easy, but it was not so. The key was not giving chances to the opponent. We played aggressively, thinking about each move in advance, ” said the center.

Apart from a good attack in the “Cincuentenario”, the team from San Juan showed a good service and defense.
“Generally, it was a great game but the defense was amazing. This affected the opponent, not only at the tactical level, but also on the psychological one, ” added the center.

The team led by Armoa played great games in the regular season in playoff, already taking five victories.
“It would be easy to assume that we always play well, but now is more noticeable by the level of our rivals. Now we are in a good position, with the result of 2:0 and can define the series at home with the encouragement of our fans. So, everything depends on us.”

GER M: Everything is possible