Bar, Montenegro, April 13, 2012. The second day of action for the European qualifier that is currently taking place in Bar, Montenegro, ended with three straight-set wins claimed by the junior national teams of Italy, Belarus and Greece. Italy is currently atop of the charts being the only team with two victories in as many matches. 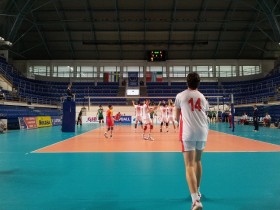 Italy opened the program on Thursday by downing Sweden 3:0 (25-23, 25-15, 25-12) playing with great style and confidence. The young “Azzurri” were on a class of their own especially in attack while their opponents struggled in defense and could not do much to stop the Italian march.
Later in the afternoon the home guys of Montenegro disappointed their fans as they played well below their standards being routed in straight sets by Belarus whose players impressed with some excellent blocks and set the pace throughout the whole game (25-14, 25-20, 25-18).
Finally Greece scored its first win of the tournament after losing to Italy on Wednesday by delivering a great performance to outclass the Finns in straight sets too (25-17, 27-25 and 25-21).