Piatra Neamt, Romania, April 12, 2012. Russia and Romania are pretty much going to fight for the sole ticket at stake to make it to the final round of the 2012 CEV Junior Volleyball European Championship – Women as they easily downed their respective opponents, i.e. Portugal and Finland, for the second day of action in Piatra Neamt. Greece also seized the night there to edge Hungary in straight sets and look confidently towards the next three games on schedule up to this coming Sunday. 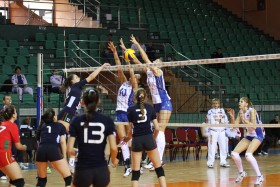 Russia opened today’s program at “Sala Polivalenta” in Piatra Neamt by downing Portugal in three straight sets (25-16, 25-21, and 25-14) to keep a perfect record after two rounds of action having edged Greece with the same score on Wednesday. Russia’s show of strength was marked by the great blocks of Anna Luneva and Irina Fetisova in the opening set where Portugal pushed hard to find its way into the game but could not stand the quality and determination displayed by the girls from Moscow who easily cruised to the final 25-16. A solid defense and the excellent attacks by their middle blockers paved the way for the Russian girls in the second set even though Portugal was able to stay a little closer in the score (25-21) via the valuable help contributed by Beatriz Santos and Mariana Maia. Russia then relaxed a bit and was even trailing by 5 at the first technical time-out of set 3 before the side mentored by head coach Svetlana Safronova woke up and restored its supremacy already by the second mandatory stop (16:11). Solid blocks and a very good reception were the main weapons of the Russian girls in this section of the game which ended with a pretty impressive score (25-14).

Romania emulated the Russian giant by claiming its second win in as many matches and once again in straight sets by routing Finland with a very clear score line (25-14, 25-19, 25-9). Middle blocker Iuliana Matache was just outstanding for the home side in the opening phases and even though Finland was longing for the right composure in blocking, still the home heroines dictated the pace of the game very comfortably (16:10) to go for a massive 25-14. Romania played with great intensity and determination also in set 2 leaving no chance to Finland with wing spiker Cristina Cazacu anchoring her side for a pretty quick 25-19. The third set was a pure formality for the home side that dominated in all fundamentals well mastered by the inspired setter Denisa Viloiu. Middle blocker Matache and outside hitters Cazacu and Dora-Diana Carbuneanu were not to stop and the match ended in a clear 3:0 (25-9).

The daily program in Piatra Neamt was rounded out by another 3:0, this time claimed by Greece over Hungary (25-19, 25-18, and 25-18). The score was initially very close but Greece gradually widened the gap (8:6, 16:11) via the contribution of Anthi Vasilantonaki and Olga Strantzali. The girls from Hungary fought back with some good attacks by Orsolya Stefanik but still Greece could control the last section of the set going for the final 25-19. Things did not change that much also in set 2 where Greece killed some blocks to dictate the tempo of the game at both technical time-outs (8:6, 16:12) with Vasilantonaki and Strantzali demolishing their opponents with powerful spikes from all angles of the court. Greece displayed some excellent Volleyball also in set 3 and played quite relaxed to go for the final and well deserved 3:0.