Nova Gorica, Slovenia, April 12, 2012. Spain, Croatia and Belgium claimed their respective matches in the second round of action of the European qualifier that is taking place in Nova Gorica and whose winner will be pocketing a ticket to the final round of the 2012 CEV Junior Volleyball European Championship – Women scheduled for mid August in Ankara, Turkey. Belgium is currently on top of the standings being the sole team with a record of 2 wins so far in the tournament. 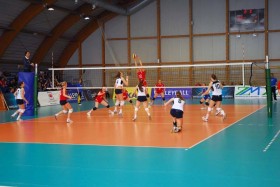 After losing to Ukraine on Wednesday, Spain scored its first win in Nova Gorica by edging the girls of Sweden 3:1 (20-25, 25-21, 25-21, and 25-18). The Spaniards got back on track after losing the opening set and they displayed a solid and well-organized play to sweep the next three. “After our defeat from yesterday this was a very important game” said head coach Jose Miguel Serrato “and we did a very good job by stopping their most dangerous spiker”. “After two losses I am afraid that my girls will lose their motivation and it won’t be easy to play the next three matches with the necessary focus” added Sweden’s mentor Karl Nordén.

The second match of the day was a derby where the hosts of Slovenia were eventually edged by their neighbors from Croatia with the score of 2:3 (25-22, 27-25, 22-25, 14-25, and 12-15). The local heroines were actually controlling the game but they lost composure, especially in the fourth set, and were not able to return to their full potential for the tie-break that put an end to a terrific fight that lasted for two and a half hours. “I am very happy with this win especially because we had to play without our captain and best player while Slovenia definitely enjoyed the home advantage” said Croatia’s head coach Nino Matjacic.

The last game of the day started a little later than initially foreseen and Belgium eventually edged Ukraine with the score of 3:1 (25-16, 26-28, 25-16 and 25-17). “We played a good game and I am evidently satisfied with this win” said head coach Julien Van de Vyver.