Ankara, Turkey, April 12, 2012. Turkey and Germany scored their second wins on Thursday and they are currently topping the charts of the European qualifier to the 2012 CEV Junior Volleyball European Championship – Men that is currently taking place in Ankara. While Turkey downed Latvia in straight sets, Germany conceded one to their opponents of Portugal, with the program of the second day being completed by the rather surprising victory of Austria that was able to edge Slovakia with the score of 3:1 to claim its first positive result in the group. 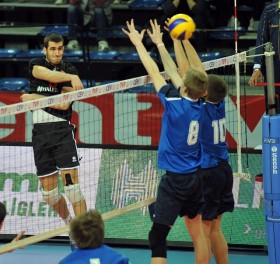 After downing Slovakia on Wednesday, Germany edged Portugal 3:1 (25-13, 21-25, 25-16, 25-22) to open today’s program at “Baskent” sports hall and keep an immaculate record after two days of action. Germany dominated the scene in the opening set quickly going up 8:4 and 16:9 to finish it off with an impressive margin of 12 points. Even though Germany was up at both mandatory stops of the second set (8:7 and 16:14) Portugal could turn the odds around and well supported by team captain Hugo Oliveira went for the 25-21. Germany got back on track in set 3 by asserting its clear supremacy there (8:3, 16:12 and 25-16) before set 4 turned into a closer affair, with Portugal enjoying the narrowest margin at the first technical time-out before Germany changed gear to finish it off at 25-22. Ruben Schott and Jose Gomes topped the charts of the best scorers at the end of the game with 15 points apiece.

Later in the afternoon Austria emulated the neighbors from Germany by edging Slovakia with the score of 3:1 (17-25, 25-21, 25-19, 27-25). Actually Slovakia had easily controlled the operations in the opening set (8:5, 16:9) going for a speedy 25-17 and even though Austria initially went up in set 2 (8:5), Slovakia stormed back to set the pace by the second technical time-out (16:14). Austria’s outside hitter Stefan Lechner changed the course of the game in the late phases of this set helping his side go for the final 25-21. Even though there were some long rallies, Austria was able to control the game in set 3 (8:6, 16:13), hence calling for the provisional 2:1. The fourth set was really close but Austria, anchored by team captain Maximilian Thaller, eventually seized the day (27-25) for its first win in Turkey’s capital city. Slovakia’s opposite Lukas Stahuliak top scored in the game with 23 points while Lorenz Koraimann contributed 18 for Austria.

The home guys of Turkey rounded out the program by downing Latvia in straight sets (25-17, 25-21, 25-21), hence keeping an immaculate record after two days of action in Ankara. Latvia started the game quite bravely with opposite Reinis Pekmanis killing a few blocks but Turkey rapidly got full control of the operations, setting the pace at both mandatory stops (8:5 and 16:10) to finish it off at 25-17. After trailing – but only by one point – at the first technical time-out, Turkey gradually stepped up in set 2 with a block of team captain Burak Güngör sealing this section of the game at 25-21. The story of the game did not change in set 3 with Turkey easily controlling the match (8:3, 16:8) while Pekmanis was the only guy from Latvia that was able to stand the pressure put by the home heroes that eventually could start their celebrations after wrapping it up in straight sets (25-21). Pekmanis top scored for Latvia with 20 points (including 2 aces and 3 blocks) while Gökhan Gökgöz stood out for the home side with 23 points that included 5 aces and 5 blocks.