Kharkiv, Ukraine, April 12, 2012. The Netherlands, Belgium and the hosts of Ukraine started yesterday their quest for a ticket to make it to the final round of the 2012 CEV Junior Volleyball European Championship – Men by scoring convincing wins in their respective debuts at “Lokomotiv” Sports Palace in Kharkiv. 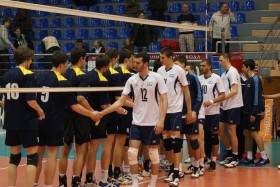 The program of this qualifier was opened by the Netherlands that edged Israel 3:1 (25-17, 17-25, 26-24, 25-23). The “Oranjes” started pretty well there by imposing their rhythm in the opening set before Israel fought back to level the count and call for the provisional 1:1. The third and fourth sets were hardly fought and provided the audience with some classy actions. The score stayed always very close but eventually the Dutch guys got the upper hand by scoring the deciding points (26-24 and 25-23).

Later in the afternoon Belgium routed Croatia in straight sets (25-22, 25-12, 26-24) asserting its supremacy right by the start of the game. The Belgian dominance was absolutely evident in the first and second sets while the score remained a little close in set 3 with Belgium eventually sealing it at 26-24 to take maximum points from this game.

The daily program was rounded out by the debut of the home heroes of Ukraine who were able to compensate for a shaky start to eventually down Hungary in three straight sets. The guys mentored by Anatoliy Yanushchyk looked very nervous in the opening phases and they trailed 2:5 before they could get full control of the operations supported by their main star Dmytro Dolhopolov. After taking the opening set, the home heroes still did not unleash their full potential as they felt some pressure and the responsibility of playing in front of their own fans, but were cold enough to seal it at 26-24 before dominating the scene in set 3 where they quickly went up 15:9 to wrap it up with a comfortable 25-18.