Zdar nad Sazavou, Czech Republic, April 12, 2012. France, Spain and the hosts of the Czech Republic started their European campaign in the second round qualifier that is taking place in Zdar nad Sazavou by claiming their respective opening matches there with Slovenia, Estonia and Romania. 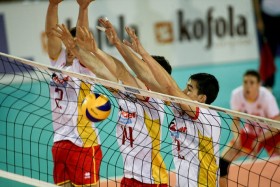 The 2011 Youth European silver medalists of France did not have it easy at all with Slovenia and they eventually could score their first win in Zdar nad Sazavou only at the tie-break (25-23, 19-25, 25-20, 17-25, 15-10).
Slovenia started off with a very good pace and went up 8:3 by profiting of some errors made by the French guys. However, France stormed back later in the set and could eventually turn the charts around to go for the provisional 1:0. However, although being the pre-favorite of the group, France struggled also in the second set with Slovenia cruising away for a speedy 25-19 with setter Jan Brulec well mastering all of his attackers. France could pocket set 3 but Slovenia fought back in the fourth set to call for the tie-break where the “Bleus” opened the gap by pressuring Slovenia’s defense with their service to eventually wrap it up after more than 2 hours of play.
“We only had a couple of practices before this match and we still have to adjust to the sports hall” said France’s team captain Trévor Clevenot. “Our performance today was not brilliant but still good enough to claim the win”.
“We came here to sweep all matches and even though we scored a win, I still hope we will deliver a more solid performance in the next days” stressed out head coach Jean-Manuel Leprovost.
“It was a very tough game; in the tie-break our opponents pushed a lot with their service and we could not control it, so all of our actions were somehow sidelined by our weak reception” stated Slovenia’s setter Jan Brulec.
“France played a little different than we expected; I am satisfied with our performance even though I have some regrets since we could have won” added head coach Samo Miklavc.

The hosts of the Czech Republic delighted their home fans in Zdar nad Sazavou with a classy performance on Wednesday by routing Romania in three straight sets (25-22, 25-17, 25-10). The Czechs immediately set the tone of the match by opening with a 5-0 mini-break and the opening set was marked by middle blocker Vojtech Patocka who chiefly contributed to the final 25-23. Anchored by their captain Adam Zajicek the Czechs stretched that good momentum also to set 2 (8:3) widening the gap to 19:10 before Romania fought back to -4 as the hosts relaxed for a while. However, the home side quickly got back composure and could finish it off with a direct spike by setter Pavel Bartos (25-17). The third set was virtually decided by the serving turn of Jindrich Kuchar whose floating serviced turned into a real nightmare for the Romanian defense, with the home guys going for a quick 25-10 to score their first win in the tournament.
“We made a lot of mistakes in the opening set with our jump service but then we switched to a more tactical service that the Romanians had problems to control until the end of the match” said Czech head coach Petr Juda. “We are very happy with this first win”.
“We struggled a lot in reception while the Czechs fully deserved this win, as they were also helped and boosted by their fans” stated Romanian mentor Valentin Grigorie, while captain Claudiu Dumitru added: “We did not play well today but we have to stay focused for the next games”.

The daily program was completed by Spain’s 3:1 victory over Estonia (25-20, 25-21, 21-25, 25-18). Spain’s opposite Andres J. Villena – one of the best players at last year’s Youth Worlds in Argentina where the Iberians claimed the silver medal – paced his side while left-handed Karlis Mesila provided Spain’s defense with some tough work as he spiked with good consistency for Estonia. The guys from Tallinn fought bravely but Spain eventually had the upper hand by imposing its rhythm especially in the fourth set.
“We did not catch a good start at all and made a way too many mistakes losing the first and second sets quite easily. We found our best play in the third set that we eventually won but still it was not enough to bring it home in the end” said Estonia’s head coach Urmas Tali. “The start of the match was not good at all for us especially as we struggled to find a way through their block” added team captain Karel Ellermaa.
“We played a good first and second set but then we lost our rhythm in the third as we relaxed a bit, thereby losing consistency especially in reception” said Spanish star Villena. “We started well but Estonia gradually got into the game. We scored this win by playing a good fourth set where we did a good job in defense as well as with our setter” concluded head coach Ricardo Maldonado.