Piatra Neamt, Romania, April 13, 2012. Russia and Romania are most probably going to deliver a great showdown later this weekend as these sides extended on Friday their great winning streak by scoring two more wins in straight sets in Piatra Neamt. 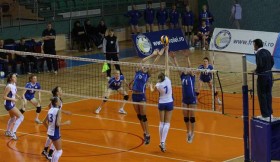 Russia got back from a weak start to easily dispose of the Finns while Romania was able to control the game with Hungary avoiding the risk of a possible fourth set to stay in contention for a ticket to qualify for the final round of the 2012 European Championship. Greece completed the daily program there with a solid performance to down Portugal in straight sets too.

Russia’s machine did not slow down in the third day of action at “Sala Polivalenta” in Piatra Neamt where the young girls around head coach Svetlana Safronova downed Finland in straight sets (26-24, 25-12, and 25-19) to keep an immaculate record with 3 wins in as many matches so far and no sets at all conceded to their opponents.

Actually the match had not started that well for the Russian side as Finland profited of their lack of focus and determination to go up by 5 points at the first technical time-out of the opening set. The Finns played with great quality especially in reception and while their opponents made some more easy mistakes, they could dictate the tempo of the game by the second mandatory stop (16:13). The course of the game changed only after some good attacks scored by Russian middle blocker Irina Fetisova but still the Finns stayed concentrated and guarded very well at the net to stay to the front at 21:17. Finally Russia realized that the situation was getting risky and complicated, so setter Elena Novik found the right coordination with Anna Luneva and Irina Fetisova who anchored the Russian comeback with their superb spikes to pocket the opening set with the score of 26-24.  Russia maintained that good pace also in set 2 (8:5, 16:8) while Finland could no longer respond to the quality and intensity of play provided by their opponents. With great pressure and figures the dominance of Russia was ocular and confirmed by the final score, a massive 25-12.

Set 3 was a pure formality for Russia that claimed a very good margin (8:4, 16:12) right from the start and even though Finland attempted a comeback with Roosa Laakkonen, still Russia was not ready to take any more risks and finished it off in straight sets (25-19).

The home heroines of Romania emulated their rivals from Russia by scoring their third win too in the group this time by edging their neighbors from Hungary in straight sets (25-22, 25-23, and 25-21).

Likewise Russia earlier in the afternoon, Romania also struggled in the opening phases of the match but eventually went up already by the first mandatory stop (8:7). However, Hungary did not wait that long to storm back and claim a margin of 4 (16:12) before Romania fought back again with more consistency in reception and setter Denisa Viloiu finding the right coordination with her spikers to cruise to the final 25-22.

A similar story developed in the second set with Romania going up 8:7 before Hungary asserted its supremacy in offense mainly via opposite Orsolya Ilyes and middle blocker Lili Borsos who regularly found a way through the Romanian block to move up 16:11. Romania clawed back with excellent combinations in attack powered by outside hitter Cristina Cazacu and opposite Iuliana Cazamir, turning the tables around (21:19) and showing great determination in the final phases to seal the deal at 25-23.

In set 3 Romania finally dominated the scene reducing unforced errors and playing with great intensity to finish it off in straight sets (25-21).

The Hellenic girls displayed great quality and confidence right from the start of the game especially with their opposite Anthi Vasilantonaki who literally crashed Portugal’s defense line. Greece went up 8:2 by the first mandatory stop and did not show any mercy for their opponents with additional spikes being regularly killed by Dafni Varoudaki. The distance was already clear by the second technical time-out (16:10) and Portugal could do nothing but accept a massive 25-14 on the scoreboard.

The blocks of Neusa Neto helped Portugal stay tuned in the opening phases of set 2 but once more Vasilantonaki was on a class of her own setting the pace for Greece’s offense (8:6, 16:13) without slowing down in the final section of that set to contribute a second 25-14.

Nothing changed in the opening of set 3 with Greece sailing away 8:3 before setter Maria Baptista got some more inspiration and Portugal’s attack gained consistency and efficiency. It was middle blocker Neto who regularly surprised Greece’s block and Portugal even got to the front at 16:15; after this moment a neck-to-neck race unfolded with Greece looking a little too relaxed and Portugal profiting of every single chance to score some more points. Finally Greece realized it was getting too risky and Vasilantonaki took her side by the hand to finish it off in straight sets (26-24).