CEV junior W: Austrian girls are pleased with their great campaign in Bardejov

Bardejov, Slovakia, April 16, 2012. Even if the Austrian girls lost their last match against the hosts of Slovakia on Sunday night and missed the chance to directly qualify for the 2012 CEV Junior Volleyball European Championship, everybody in the team is just proud of the great performance delivered in the tournament. 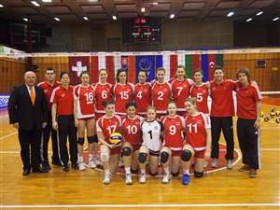 Head coach Qing Li admits that she didn’t expect her team would be able to fight for the first place in Pool D.

“Honestly I have to say that I thought we would play just for the third place. But my team showed strong will and played very good matches in Bardejov especially against the Netherlands and Switzerland. So that’s why we really deserve to be in the top three”.

The Austrian girls finished their campaign with three wins and two losses. After the 3:0 win in the opening match against Azerbaijan, the Austrians almost needed two sets to find their rhythm of play against Bulgaria. After they had done so, they won the third set and were close to play a tie-break, but Bulgaria managed to take the win.

From this point every other game became a real final. And the Austrian girls won at least two of their three final matches. The 3:0 win against the Netherlands on Friday was for sure a sign of strong character and could be called one of the greatest successes for the Austrian girls in some years. Since Switzerland had also edged the “Oranjes”, the Swiss team seemed to be an even harder opponent and the match confirmed this assumption. The Austrian juniors gave away the first set after not being able to convert three set balls but that night the first set was going to be the last present from Austria to their neighbors. The next three sets Austria kept its focus till the end and won the match 3:1.

In the last match against Slovakia the Austrians weren’t able to fight with their opponent but were mainly struggling with themselves. On the other side the hosts played a great match and took advantage of the great atmosphere to be felt in the sports hall. Austria couldn’t achieve more than to win set number two and lost 1:3. But after just some minutes of disappointment the Austrian girls could smile again. They realized that they had played a great tournament, almost had overcome all expectations and are still able to qualify for the European Championships through the third round.

Qing Li concludes: “I’m proud of my team because we really played a solid tournament. In the last years we had played only some good matches. This time we showed good skills in almost every set. I’m really looking forward to the next round. It’s a great pleasure to play against teams like Germany or Belgium and it will be another important experience for my young side”.

In July Austria will play in third round Pool E against the teams of Germany, Romania and Belgium