Bardejov, Slovakia, April 15, 2012. The home girls of Slovakia booked on Sunday a direct ticket to the final round of the 2012 CEV Junior Volleyball European Championship that will be held this coming August in Ankara, Turkey. 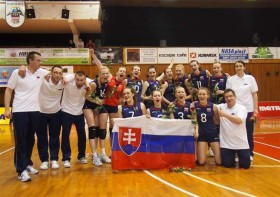 The local heroines beat the real sensation of the group, Austria, 3:1 in the last match of the tournament played in Bardejov and finished on top of the standings with 12 points. Bulgaria finished second also with 12 points but with a worse set ratio while Austria was finally ranked third, so both teams are set to compete in early July in the third and last stage of the qualification process.

These teams were already out of contention from the run for making it to the next round but the Azeri girls started out very aggressively claiming the opening set with a massive 25-14. The “Oranjes” gradually got into the game and found their best play to draw level (25-21). Azerbaijan was leading by 5 points in the third set but did not keep that rhythm all the way through with the Netherlands going for a second 25-21. The Dutch girls extended that momentum also to set 4 thereby claiming their second win of the tournament while Azerbaijan ended its run with a negative 0:5 win/loss record.

Bulgaria needed to take maximum points from its last game with Switzerland to keep some real chances to advance directly to the final round of the European Championship waiting then for the result of the match starring Slovakia and Austria. Switzerland was already eliminated from the competition and after a lucky but happy end of the first set (26-24), Bulgaria asserted its rule to go for a win in straight sets (25-18 and 25-15).

“We did what we had to do. We played good, even if the first set was close. We can only wait for the result of the last match” said the head coach of team Bulgaria Radoslav Bakardzhiev.

“We did our best; we had a very good practice in the morning and we were motivated. I am very proud of this team even though we didn’t qualify for the next round. We will go back to training, we have an ambitious project for developing this group and we believe in that” added the head coach of team Switzerland, Florian Steingruber.

The last match starring Slovakia and Austria was the real highlight of the tournament, as both teams were longing for taking three points out of this game to claim a pass for the final round of the European Championship. Bulgaria was hoping the game to go up to a tie-break as this scenario would have paved the way with gold for the girls from the Balkans. The atmosphere was just great in Bardejov as the home girls opened strong to claim the first set 25-20. However, even though they went up 8:5 in the second, Austria displayed some great defense and could go for a tie after sealing this affair with the score of 25-21. Slovakia stood out in all fundamentals throughout set 3 (25-14) and by this moment the course of the game had somehow gone the way of the hosts who dominated the scene also in the fourth set (25-14) thereby starting the celebrations with their many loud and loyal fans as Slovakia will be competing in the final round of the European Champs for the second consecutive edition.

“I am happy. The match was extremely tough because both teams were under the pressure. I believed in my girls, I told to my players that as long as we play our own game, we will be successful. I think we used our experience from previous difficult international games. It is great that this group has qualified for the final round of the European Championship. I want to thank the spectators as they helped us a lot tonight” said the head coach of team Slovakia Eva Kosekova.

CEV junior W: Austrian girls are pleased with their great campaign in Bardejov