Piatra Neamt, Romania, April 15, 2012. The young girls from Russia qualified on Sunday for the final round of the 2012 CEV Junior Volleyball European Championship after edging the home heroines of Romania 3:1 (25-16, 25-23, 23-25, and 25-17) in what was the real highlight of the tournament held this week at “Sala Polivalenta” in Piatra Neamt. 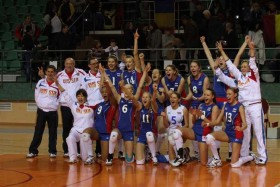 Finland edged – quite surprisingly – Greece in straight sets to finish third in the standings and “accompany” Romania in the third qualification round that is slated for next July.

As Russia and Romania had swept all of their previous matches, this showdown was going to determine the side that would have finally seized that sole ticket at stake to make it to the final round that is slated for mid August in Ankara, Turkey.

Russia quickly imposed its pace with setter Elena Novik opting quite often for Anna Luneva who was able to avoid Romania’s blocks and crash the defense line of the home side. Russia went up 8:4 by the first mandatory stop and although Romania tried to respond with the spikes of Cristina Cazacu, still the guests enjoyed a very reassuring margin (16:10) at the second technical time-out and fulfilled their goal to wrap it up as quickly as possible (25-16) mainly via the powerful kills of Kseniya Ilchenko.

Romania’s reaction came in the opening of the second set where Cazacu and Dora Carbuneanu placed some good spikes to move their side to the front (8:4); it did not last that long as Russia was able to claw back vigorously and turn the tables around already by the second technical break (16:14). Romania stepped up in reception and anchored by Cazacu regained the lead in the score (21:20) but finally missed some services in the deciding phases of the set, with outside hitter Eli Uattara finishing it at 25-23 for the Russian giant.

Russia enjoyed the narrowest margin at the first technical time-out of set 3 (8:7) but afterwards the guests relaxed a bit to pave the way with gold for Romania; Cazacu regularly found a way through the Russian block and her determination was paid back with the provisional lead (16:13); although Russia found back some more composure in reception, Romania responded with the spikes of its headliners, Cazacu and Carbuneanu, to finish it at 25-23 and go at least for a fourth set.

This initially turned into a neck-to-neck race with Russia opening the gap before the second stop (8:7, 16:12); by this time Romania struggled to find a way to stop the march of their opponents who destroyed the defense line of the local heroines with their attacks and added some more blocks to the count to finish it at 25-17 and pocket their pass for the final round of the European Champs.

In the second match of the day Finland downed Greece in straight sets (25-23, 25-14, and 25-15) to finish third in the standings and hence continue its campaign in the next qualification round that is scheduled for mid July.

Actually Greece had caught the better start anchored by its opposite Anthi Vasilantonaki (8:5) while Finland was evidently struggling in reception. However, the Finns gradually found their way into the game going up by the second technical time-out (16:14) and with their outside hitter Sanni Rihu on fire, the “Suomis” surprised their opponents whose mistakes did also help collect the final 25-23.

Finland was really unstoppable in set 2 going up 8:7 but steadily widening the gap (16:7) with great spikes contributed by its middle blockers for a speedy 25-14. The Finns prolonged that great momentum also to the third set (8:3, 16:6) while Greece looked no more focused to attempt an impossible comeback, with the girls mentored by Kai Stenius finishing it off in straight sets for a well deserved win.

Hungary was seen as the pre-favorite of this game but Portugal surprised its opponents with some clever attacks to set the pace (8:5, 16:13) and even though Hungary attempted a comeback, still Portugal could hold on and finish it with the score of 17-25. Hungary regrouped in set 2 and imposed its quality by easily pocketing that section of the game (25-15) and even though they still had some more ups and downs, the Magyars could seal also set 3 after a close final rush (25-23). Everything was easy for them in the fourth where they left no chance to their opponents to wrap it up with a speedy 25-16 thereby ending their European campaign for this cycle with a positive result.