Zdar nad Sazavou, Czech Republic, April 15, 2012. Spain completed its campaign at the European qualifier that was held this week in Zdar nad Sazavou by downing Romania in three straight sets (25-17, 25-10, and 25-19) thereby keeping its leadership in the standings and advancing to the final round of the European Championship scheduled for late August in Gdynia (Poland) and Randers (Denmark). France and Slovenia claimed their last matches to finish second and third respectively and advance to the next qualification round scheduled for mid July. 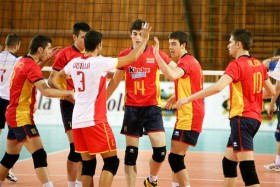 The Spaniards – silver medalists from the 2011 FIVB Youth World Champs in Argentina – swept all of their matches in Zdar nad Sazavou and can already start their preparations for the final round without any other break this summer.

“I congratulate the local people for the great work they have done for this tournament. The match against the hosts of the Czech Republic in front of 1’500 fans and with a fantastic atmosphere in the sports hall was just great. We are very happy for having booked our pass to the final round of the European Championship, today’s win with Romania was more of a formality” said Spain’s head coach Ricardo Maldonado.

“The quality of our performance was not always ideal but we have improved throughout the tournament. We will work hard in the next months and I think we can go for a good result at the final round” stated Spain’s star Andres Villena.

The second game of the day decided about the third place of the standings and after losing at the tie-break to Spain and France, Slovenia finished its campaign on a high note by edging Estonia 3:1 (20-25, 25-18, 25-20 and 25-17) and move to the third and last stage of the qualification process.

“I can only praise my guys for what they have done here” said head coach Samo Miklavc. “I have been working with this group for 3 years and their progress has been remarkable. I feel a little emotional to see such a great joy in their eyes for having made it to the next round”.

The hosts of the Czech Republic finished their home campaign by losing in straight sets to France (23-25, 19-25, and 23-25), the 2011 European silver medalists in the youth category. The guests easily controlled the game as they opened the gap right from the start of all sets making the difference with their solid defense and going for a well deserved win, thereby finishing second in the standings of the group.

France’s head coach Jean-Manuel Leprovost was still angry with a decision of the referee that assigned the last point of the game with Spain to their opponents, who hence claimed the sole ticket at stake for making it to the final round, and added: “We are happy with this win and for finishing second in the Pool. I have to praise the work of the organizers who set up excellent conditions for this tournament”.