Friedrichshafen, Germany, December 12, 2011. VfB FRIEDRICHSHAFEN definitely needs a home win as the German champions play host on Wednesday night to Remat ZALAU of Romania. This is the absolute priority in order to maintain good chances to make it to the Playoffs 12 of Europe’s finest competition. 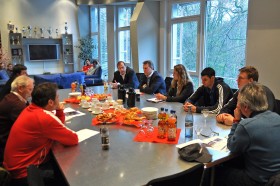 Russia’s Zenit KAZAN currently tops the standings of Pool B with 6 points, followed by VfB with 3, with Euphony ASSE-LENNIK and Remat ZALAU rounding out the charts with 2 and 1 respectively. If the hosts from the Lake of Constance claim the next two matches with the result of 3:0 or 3:1 and at the same time the Belgians of Euphony lose twice (with the same score) to Zenit, then the VfB will be booking a spot for the Playoffs 12 with two legs still to be played for completion of the league round.

“These are nice forecasts but we shall rather concentrate on our next match with Remat” says head coach Stelian Moculescu.

“We want to win, it does not matter how this will affect the charts in our group”.

“If we win the next two matches we will almost reach our goal in this competition, which is to make it out of the Pool play” says Serbian spiker Milos Vemic.

“I am sure we can attain this goal if we play our Volleyball and via the support of the fans”.

Last week the local supporters helped the team along the way to a win over BERLIN Recycling Volleys in the Bundesliga. They shall play a key role also in the clash with Remat whose roster includes a former player of the VfB, Peter Nagy.

“I hope for a full house. Every single spectator is important and the more fans we get, the easier it will be for us to play” says middle blocker Marcus Böhme.