CEV: Turkey vs. Poland is the big final in Ankara!

Ankara, Turkey, May 5, 2012. The home team of Turkey secured the second spot in tomorrow’s final of the 2012 Olympic Games - European Qualification and will face Poland to determine who gets the single ticket to London available from this tournament. In a completely packed by noisy cheering fans Baskent hall in Ankara the squad mentored by Marco Aurelio Motta outplayed reigning world champion Russia by 3:1 (26-28, 26-24, 25-16, 25-21). 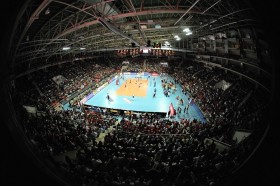 With four consecutive points Turkey reversed an early Russian lead from 1-3 to 5-3 in the first set, but quickly gave it up. The play was very even, but the home team was making more unforced errors. Russia took charge and accumulated a 4-point advantage at 16-12 and 18-14. The Turks fought back to prompt a dramatic ending and even gained the first set-point.  However, with substitute player Nataliya Goncharova’s excellent performance on the court, the world champions eventually won the set by 28-26.

The second set was no less dramatic. Turkey reduced the number of mistakes, but so did Russia. Sergey Ovchinnikov’s team controlled the score board despite some excellent spiking from Neriman Ozsoy. This time Russia was able to earn the first set-point at 24-23, but Turkey stayed focused and with great contribution from setter Naz Aydemir conquered the set by winning the following three rallies in a row.

Inspired by the enthusiastic crowd on the stands, the home team took complete control over the third set. It was time for Neslihan Darnel to shine. With her continuous bombarding of the opponent’s side of the court, she did not leave any chances for Russia in this set. Serving and reception also worked well for the Turkish team in this set and it won it by an impressive 25-16.

The Russians recovered from an early lead the home team managed in the fourth set, but stayed in contention only through 16-16. After the next rally Ozsoy went to the serving line and with fantastic contribution by the Turkish block extended the series to 7 consecutive points for 23-16. The distinguished opponent tried to fight back, but it was too late. A successful spike and a kill block by Gözde Sonsirma Kirdar for the last two Turkish points sent Russia home and turned the crowd on the stands ecstatic.

Darnel and Ozsoy topped the scorers’ chart of the match with 21 and 19 points respectively for the winning team. Turkish setter Aydemir also impressed with 6 kill blocks and 3 points in offense. Nataliya Goncharova was Russia’s best scorer with 15 points.

”It was a hard match and we lost our concentration, which ended up in defeat,” Russian captain Maria Borisenko stated after the game. ”We made many mistakes. Some of our best players were tired and could not show their best performance. We lost but, we want to be successful in Japan to qualify for the Olympic Games.”  Her head coach Sergey Ovchinnikov agreed:  ”We would like to have won here, but now we are aiming for qualifying from Japan. We want to be successful there and go to the Olympics.”

”Initially we were very nervous and made many mistakes. You cannot win against Russia by making such mistakes,” Turkish captain Esra Gümüs commented on the match. ”Then, we served well, attacked well, blocked well and dominated the game. I congratulate my teammates for their outstanding performance. We look forward to the final match tomorrow.”  Head coach Marco Aurelio Motta added:  ”It was a very hard match for us because we played against a very strong team – the world champion. They have very tall players in comparison to us. In the first two sets we always came from behind, but then we led the game and started to play better. I am proud of my players’ performance both physically and mentally”.