CEV: Poland on to the final in Ankara after knocking out Germany in the semis

Ankara, Turkey, May 5, 2012. Poland is the first team that earned a spot in tomorrow’s final of the 2012 Olympic Games - European Qualification. The girls in red and white won the early semifinal in Ankara against Germany by 3:1 (25-22, 16-25, 25-14, 25-17) and are awaiting the outcome of the second semifinal between hosts Turkey and Russia to find out the name of the opponent in the battle for a ticket to London. 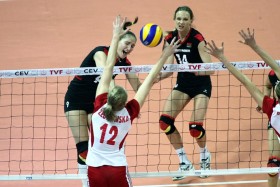 The first set featured several changes in the lead with Poland’s offense being a little more efficient. However, Germany had a 2-point advantage at 20-18 before a series of 6 consecutive points for Poland with Izabela Zebrowska behind the serving line practically determined the outcome of the set in favor of Alojzy Swiderek’s team.

Germany responded with improved reception and better attacking performance, especially by Margareta Anna Kozuch, in the second set.  The equilibrium was broken after 13-12 in Poland’s favor when 8 points in a row with Christiane Fürst serving tilted the score Germany’s way for a 20-13 lag that Poland never recovered from.

The two sets that followed were almost completely one-sided. With setter Katarzyna Skorupa nicely spreading Poland’s offense, her team dominated on the court of Baskent hall.  By stepping up its spiking efforts again and working harder with the block, Poland proved too strong for the European Championship runners-up and achieved the impressive 25-14 and 25-17 in these two sets to claim a convincing victory.

Katarzyna Ewa Skowronska-Dolata became the leading scorer of the match with 21 points. Maren Brinker was most prolific for the German side with 16 points.

German captain Kozuch congratulated Poland for the win: ”They did a good job.  We have worked very hard for the Olympic Games with my teammates.  We still have some small chance to qualify for the Olympics.  The Turkish team is very strong and I believe they will qualify for the Olympics.”  Polish captain Skorupa paid back the compliments:  ”Germany is a strong team, but we were very concentrated.  Everything is possible in this tournament.  As far as our opponent in the final, Russia is the world champion and Turkey is very strong and also playing at home.”

”We never played well in this tournament because we could not work long enough. We could not prepare both physically and mentally due to lack of time to train more.  Polish setter Skorupa set the game very fast and they were very good at back court defense and blocking.  It was a tough match”, head coach of Germany Giovanni Guidetti stated.  His Polish counterpart Alojzy Swiderek replied:  ”It is always hard to play against a strong team such as Germany. We played well. We knew that every match would be tougher than the one before in this tournament. We are waiting for the second finalist.”

FRA W: Anny Courtade is made a Legion of Honor officer