Sofia, Bulgaria, May 9, 2012. Bulgaria managed another straight-set win at the 2012 Olympic Games - European Qualification for men in Sofia. The Lions shut out traditional rival Serbia 3:0 (25-22, 25-16, 25-23) as the two Balkan powerhouses created a spectacle for the full house of enthusiastic fans at Arena Armeec hall. 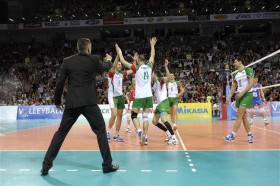 The Bulgarian team is now almost sure to make it to the semis and only a miracle can keep them away from the competition hall this Saturday.

The fans on the completely sold-out stands cheered the Bulgarians into the game and inspired them to take the lead at the very beginning of the first set. Serbia managed to trail close behind, but after the first technical time-out the home team gradually extended the gap to 21-13. After 23-15 the Blues fought their way back to 23-20 with substitute player Mihajlo Mitic behind the serving line and even got closer as the scoreboard displayed 24-22.  But then an unforced error finished the set at 25-22.

It was the phenomenal performance by its block that took care of the second set for Bulgaria. Rising Bulgarian star Teodor Todorov’s hands were an insurmountable obstacle for the Serbian attacks while iconic Matey Kaziyski was in charge of the offense. The Lions rushed to a 12-5 lead before Serbia also responded with some great blocking efforts, mostly by Marko Podrascanin, to narrow the gap down to 3 points. At the end it was once again the Bulgarian block that prevailed to develop the set into an impressive 25-16 final score.

Serbia was very strong at the beginning of the third set and put some pressure on the home team with a 5-1 lead.  Radostin Stoytchev’s players were quick to respond with a 6-point series that flipped the score from 3-6 to 9-6.  It was time for the Bulgarian captain Vladimir Nikolov to shine. His blasting attacks gave Igor Kolakovic’s squad a lot of hard time as Bulgaria gradually built up a 6-point gap by the second technical time-out.  The Serbs did not give in and with young talent Aleksandar Atanasijevic leading their efforts in offense were able to minimize their lag to only a point at 19-20. They stayed close behind the Bulgarians through 23-24, but this was not enough to stop the home team from rejoicing at the end.

Aleksandar Atanasijevic was the top scorer of the match with 19 points while Bulgarian captain Vladimir Nikolov scratched 16 on his tally for Bulgaria.  The fantastic blocking performance of Teodor Todorov produced 10 amazing points that made the big difference in this match.