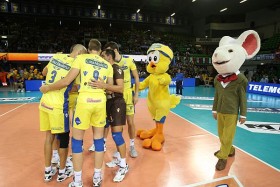 Modena swept the Luxemburg team of Strassen in the Challenge Cup second round. Despite being without Kooy and Diachkov, Modena had not trouble to dispose of the Luxemburg league leaders (only four sets lost in 9 games).

Only in the second set did Modena need to fight back from an 18-21 deficit. A Martino ace eventually sealed it for the Italians. If Strassen was to win the return game, there would be a golden set to decide who goes through (the number of set won and lost has no effect).

The winner will meet the Israeli of Maccabi Tel Aviv in the 16th of final (Maccabi was knocked out of the Cev Cup in the first round).