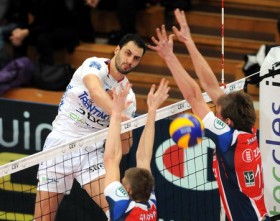 The guests stormed out with a terrific pace in set 2 (0:7) with great defense and 4 aces.

TRENTINO could not stand this pace and eventually lost also that section of the game (17-25).

With the help of their fans (some 2’000 were in attendance) TRENTINO got back on track in set 3 and 4 and eventually drew level with the contribution of Stokr, Kaziyski and Zygadlo.

The tie-break was a nail-biting race: the hosts showed great fighting spirit but their opponents got back their splendid play of the first two sets, thereby closing the game at 17-19.

Their setter Pawel Zagumny was named MVP of the match.

“We could not control some situations as we normally do and after two catastrophic sets we thought we had nothing more to lose, so we were able to find back our best play and impose it. In a few days we will play Bre Banca Lannutti CUNEO in the national league, our archrival, so we have to clean up our minds and play concentrated from the start until the end” says TRENTINO coach Radostin Stoytchev.

“I am happy with this victory because TRENTINO is the best team in the world. We both showed great Volleyball tonight with great attacks and powerful serving, aggressive play and spectacular defense” adds the mentor of Zaksa, Krzysztof Stelmach.

The two teams will cross their ways once again next week for the fourth round of action in the prelims of the 2012 CEV Volleyball Champions League – Men.