Munich, Germany, December 19, 2011. It has been a while since Generali UNTERHACHING has suffered a loss. 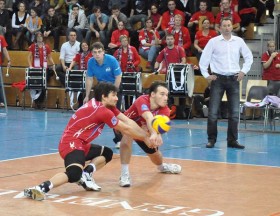 In fact, the last defeat came in late October when the best team in Germany this season lost in the prelims of the 2012 CEV Volleyball Champions League to Stade Poitevin POITIERS in France. After making it 15 wins straight versus domestic competition by beating Champions League competitor and reigning German champion VfB FRIEDRICHSHAFEN over the weekend, Generali UNTERHACHING still has much work left for the month of December.

In the upcoming games on Wednesday against Jihostroj CESKE BUDEJOVICE and the week after on Boxing Day at TV BÜHL the club’s future in the Champions League and in the German Cup is at stake.

“We must continue to stay focused and prepare us perfectly for every game” Paduretu says despite the impressive unbeaten streak.

The goal for Wednesday is obvious. UNTERHACHING and CESKE BUDEJOVICE both need a victory to stay in contention for the first two places in preliminary Pool D. Last Tuesday, Generali was able to grab three points in the Czech Republic with its first victory of this Champions League season. What made the victory even more valuable for UNTERHACHING was the fact that it came without mainstays Alexander Shafranovich (see picture, left), Denis Kaliberda (see picture, right) and Freddy Cedeno who were all missing due to injuries. The trio came back in the win over VfB FRIEDRICHSHAFEN.

Right now, Paduretu’s concern goes to libero Sebastian Prüsener. Prüsener could not play in Saturday’s game due to lumbago but was substituted impressively by Robert Hupka.

“He will be examined again”, Paduretu on Monday said of Prüsener whom he values as “our motivator on the field”. If he is not ready to play the libero will be substituted again by Hupka who before VfB FRIEDRICHSHAFEN already filled out that position very well in the loss at POITIERS.

“He is always there when we need him”, Paduretu lauds Hupka.

What concerns Paduretu is the fact that in the last two matches his team lost the first set both times and had to fight back into the game at a time when a lot of games have to be played and the injury-toll is rising.

“We haven’t been able to run full practices with all our guys for some time or start the matches with our starting six. We’ve had matches every three days on top level. That doesn’t come without consequences to the health of our squad”, Paduretu points out.

However, Paduretu isn’t looking for excuses. The coach wants another three points from the second encounter with CESKE BUDEJOVICE before POITIERS comes to “Generali Sports Arena” next January 11 for what will probably turn into a decisive game for UNTERHACHING.

“My wishes for Wednesday are three points, a packed arena and a great atmosphere”, Paduretu says.

Despite the win a week ago against Wednesday’s opponent UNTERHACHING don’t take anything for granted against the best team from the Czech Republic. No one has forgotten the impressive win scored by Jihostroj over Italy’s Bre Banca Lannutti CUNEO in the second round of action.

WCHJ W: Algeria come from behind to...