Sofia, Bulgaria, December 19, 2011. Bulgarian champion CSKA SOFIA is strongly motivated to achieve its first win in the 2012 CEV Volleyball Champions League in the match against Noliko MAASEIK that is coming up for the fourth round of Pool A. 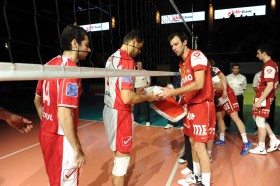 CSKA SOFIA has nothing to lose against Noliko MAASEIK

After three consecutive losses the team of the head coach Aleksandar Popov will now play for its own honor.

The libero of the national team Teodor Salparov is ready to be part of the team again after his first appearance in the 2012 CEV Volleyball Champions League last week.

The former player of Dinamo MOSCOW played for the Russian side at the tournament’s final four in 2010 losing to Italy’s TRENTINO Volley in Lodz.

Out of the group for CSKA will be Vladislav Aleksandrov who suffered an ankle injury in the match with Noliko played last week in Belgium.

Head coach Aleksandar Popov will replace Aleksandrov with the 18-year old Veselin Iliev who was part of the Bulgarian youth national team at the World Championship in Argentina this summer.

The captain of Noliko MAASEIK Jo Van Decraen is still recovering from a shoulder injury; Dutch spiker Jelte Maan could also start the match from the bench due to an ankle injury.