Kazan, Russia, December 20, 2011. Dinamo KAZAN will be playing this Wednesday its last home match of the year by hosting Volero ZÜRICH of Switzerland for the fourth round of action in Pool C of the 2012 CEV Volleyball Champions League. 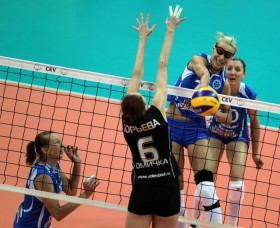 Dinamo KAZAN is preparing a Christmas gift for its fans

Last week Russia’s heavyweight was able to edge Volero and this time Gamova & Co. will try to back up their provisional leadership in the group.

Although Dinamo has a perfect record so far in Europe’s most elitist competition with three wins in as many matches, their campaign in the Russian national league hasn’t been that successful, with KAZAN being ranked only fourth after seven rounds, recently losing to Omichka OMSK (1:3).

Last week Dinamo got back on track by seeing off the underdog of the national league, Samorodok KHABAROVSK, in straight sets (25-14, 25-13, 25-11) with US American spiker Jordan Larson top scoring for the team from Tatarstan.

“If I analyze the teams that we have been playing so far, Volero definitely left the most vivid impression” says head coach Rishat Gilyazutdinov.

“They have many young but talented players”.

“Volero is a young but strong side and last week we could score that win only with great difficulty” adds setter Marina Babeshina (Sheshenina).

“So we are getting ready for a very tough match and I think a victory would be a wonderful Christmas present for our fans”.

CEV CUP: The comments of Marcon and...