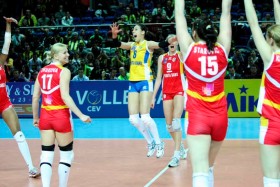 The home heroines of Rabita started with a great tempo and got a margin of 6 points before their opponents stormed back to claim the opening set after an extremely close final rush (25-27).

The second set unfolded like a carbon copy but with a different outcome; this time the guests from Turkey went up in the score but Rabita got back on track also with the help of the local supporters to draw the count (27-25).

Head coach Zoran Gajic had opted for some substitutions and this move turned into a good one, with Sanja Starovic and Mary Spicer taking their side by the hand with a classy performance. The third set also turned into a close affair but the hosts stayed concentrated and eventually took home 3 points by scoring a 3:1 win.

Serbian middle blocker Mira Golubovic was named best player of the match as she chiefly contributed to the final result with her blocks and fast play.

“It is a very important and great victory for us” says Gajic.

“All players joined the game and I am happy that we scored this victory by using the complete roster”.

“I think that we lost the opening set because I made some terrible mistakes in key moments but I am happy that we did not surrender and eventually won” stresses team captain Natalya Mammadova.

“All teams generally play much better at home but I think we have to analyze this game. Rabita played better than we did, especially in serving and attacking, so they deserved this victory. They have very good players and an excellent coach, so I think they deserve to make it to the final four” singles out the mentor of Fenerbahce, Zé Roberto.

DVV woman: eighth place as team of the year